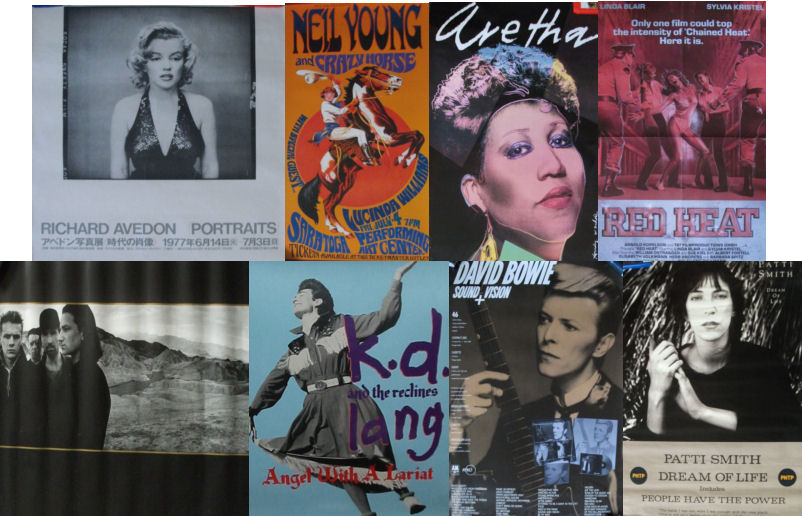 Howdy to those of you on both Open Salon and WordPress … I’ve had another OS/WP absence owing to a few reasons: life stuff, some needed household re-arranging, and a spell of writer’s block.  I was also having too much damn hot fun in the summertime as of late, seeing a slew of great gigs over the past two months.

Well … that fun seems to have unblocked things.  The words are flowing again and I’ve been busy writing, with a few already under my belt.  However, I’m going to hold off publishing anything new for a few more weeks so as to create a backlog, allowing me to publish more consistently this fall (see the bottom of this piece for what’s coming up).

As a stop-gap until then, here’s a fun, quick visual entry …

Part of that household re-arranging included going through my poster collection — which has largely languished in cardboard tubes for years — and transferring them into a better way to store them.  Furthermore, we want to do some framing after a move next year and I needed a reminder as to what I have in those tubes.  As I unveiled them, I photographed some of the more interesting ones … and here they are.

Many are — surprise! — music-related, promo posters, dating back to my years working in record stores during the late ’80s/early ’90s, along with others referencing film, tv, or events.  I’ve included some that are already framed and on our walls, but most of what follows only recently saw the light of day for the first time in years.  Decades, in some instances.

So, let’s get unrolling along … 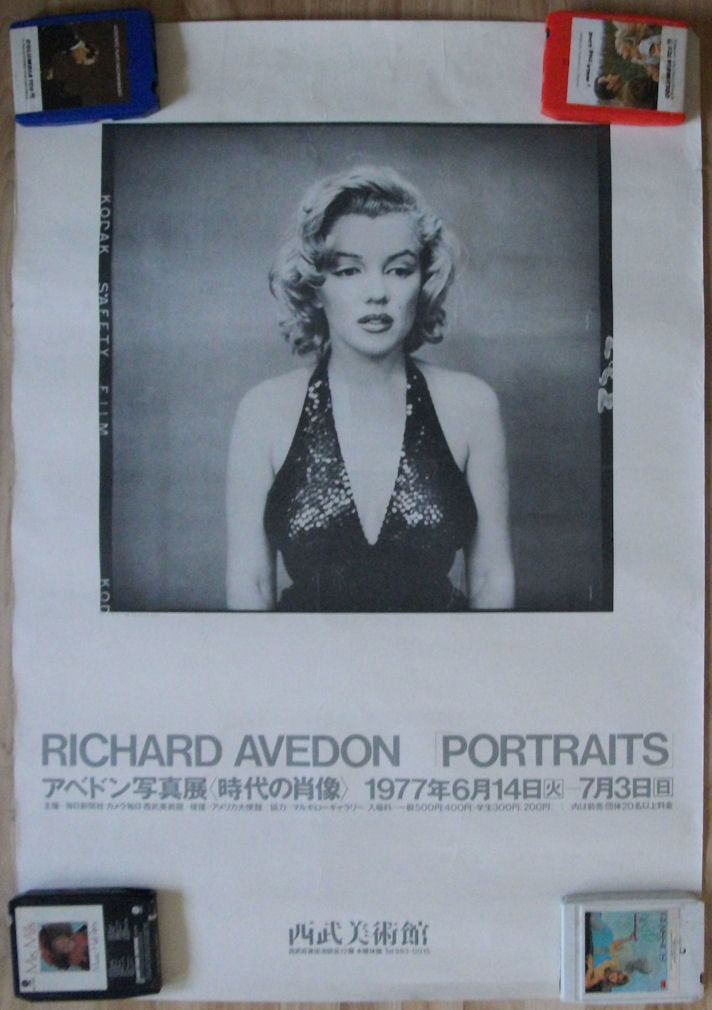 I’m a big fan of Marilyn Monroe (Richard Avedon wasn’t too shabby a photographer either), and this poster for an Avedon exhibition was on a variety of my walls for many years.  It’s such an unusual shot: Marilyn looks exhausted, vulnerable, and disoriented.  It’s a very human photo.  As has been remarked by others, this is more of a portrait of Norma Jean than Marilyn.

Please Note: Since many of these posters have spent years rolled up in tubes, I needed to use some anchors in order to have them lay flat … these 8-tracks I grabbed seemed to do the trick! 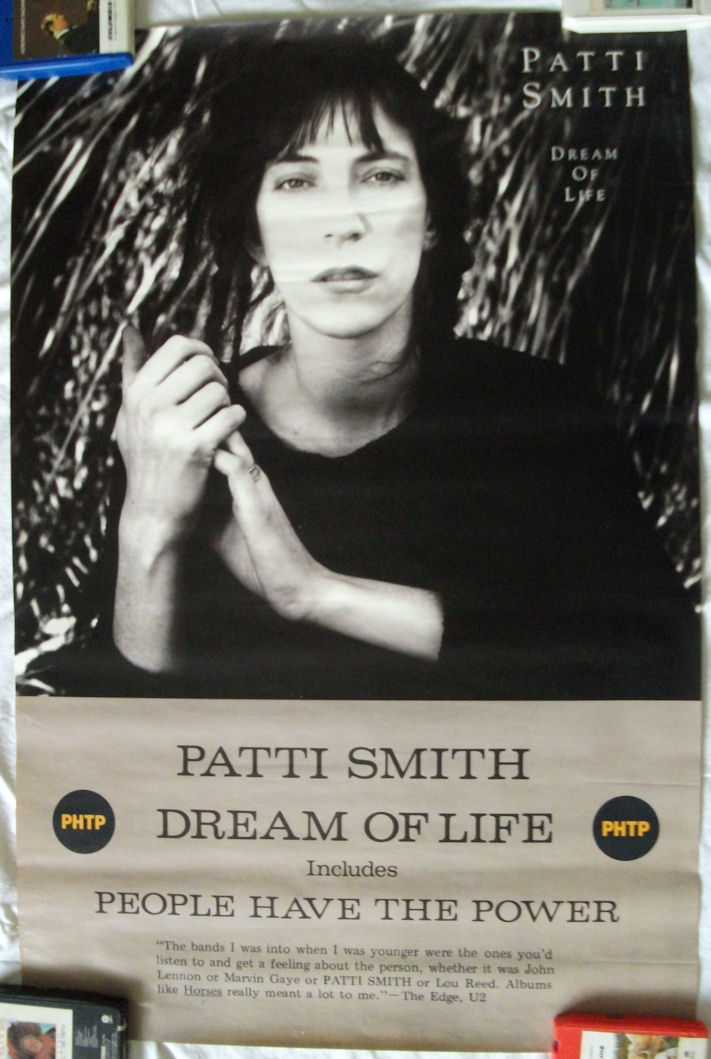 Patti Smith promo poster for her 1988 Dream of Life album.  One of the last photos taken by Robert Mapplethorpe.  I just saw Patti again recently … and will be seeing her again in September (see below). 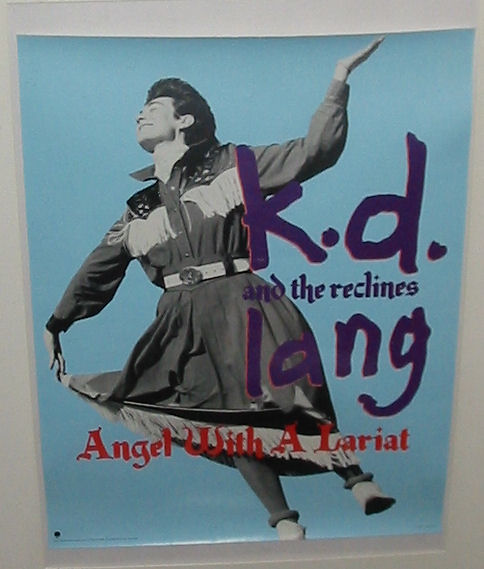 Cublet and I both love this retro-styled poster for k.d. lang’s Angel With A Lariat (above), from 1987, which is framed and on our basement wall.  I’d forgotten that I also have this promo item for 1988’s, Owen Bradley-produced Shadowland, one of her very best albums. 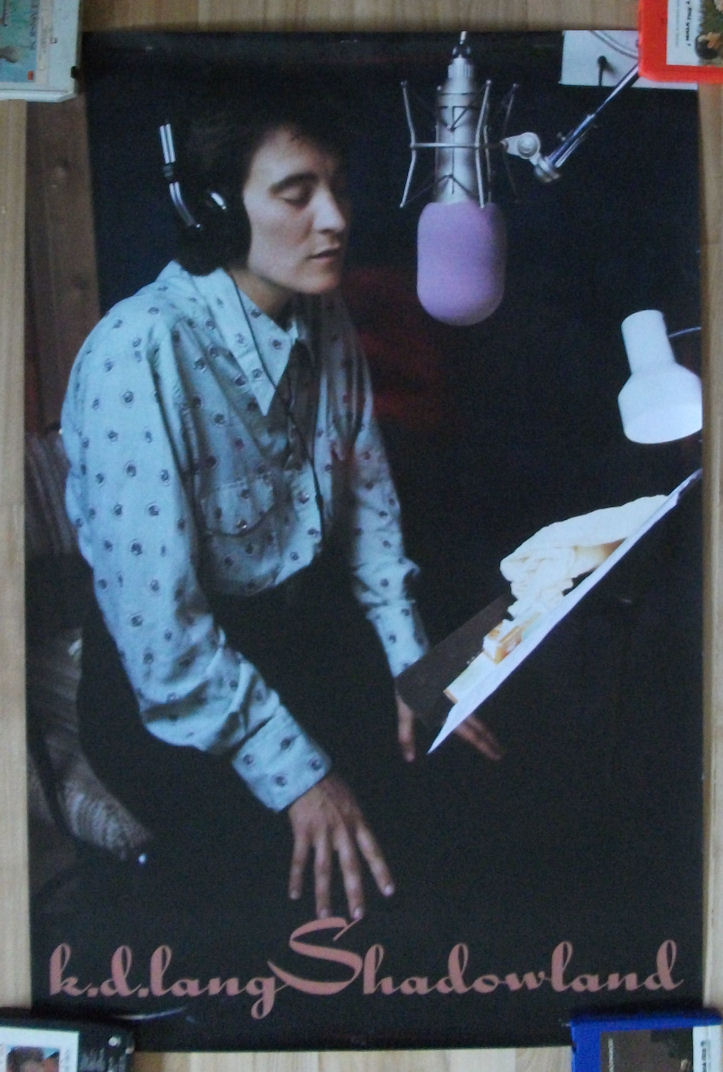 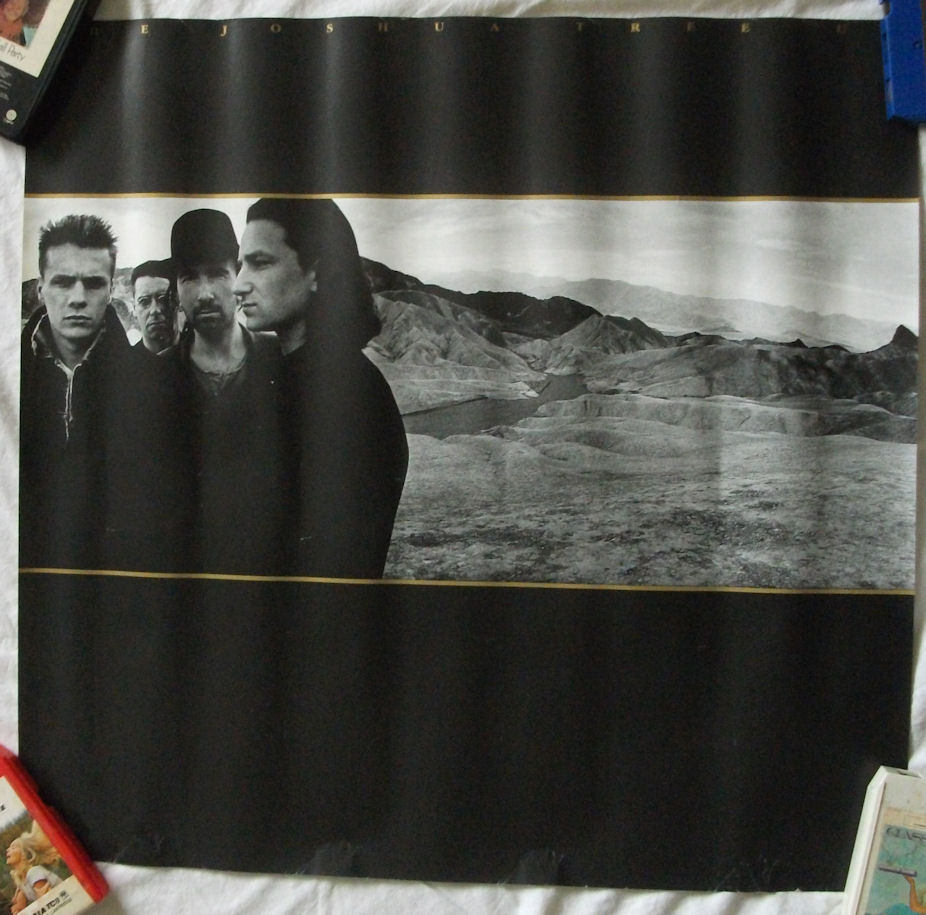 A wrinkled but probably fixable promo item for U2’s The Joshua Tree.  I vividly remember the day this album came out, for reasons both good and bad.  One of their finest albums, too. 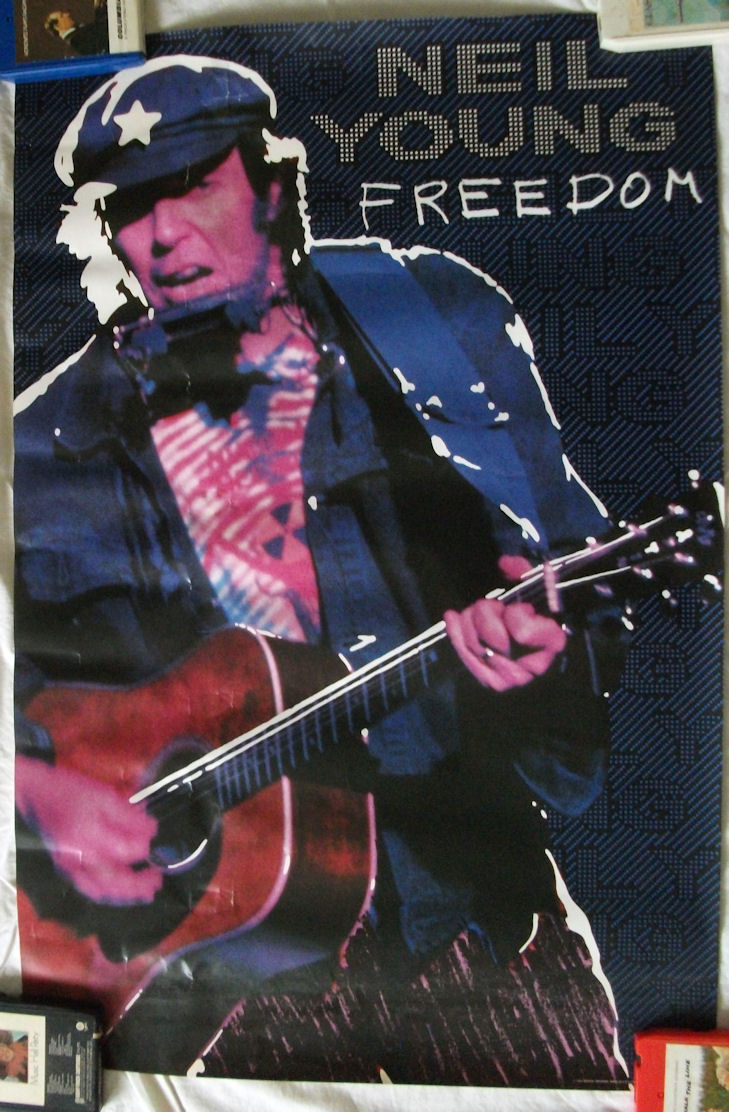 (Above) Promo poster for Neil Young’s 1989 “comeback” album, Freedom, after a patchy decade for him.  I saw him on the tour that preceded its release (coming down the line as no. 60) where he debuted many songs that turned up here.  I still feel this album was never as good as it could have been.  (Below) A beautiful reprint for a Neil/Lucinda Williams show sporting a terrific graphic, a gift from my pal MZ (this one is definitely getting framed).  I’ve seen both of them several times, but never on the same bill. 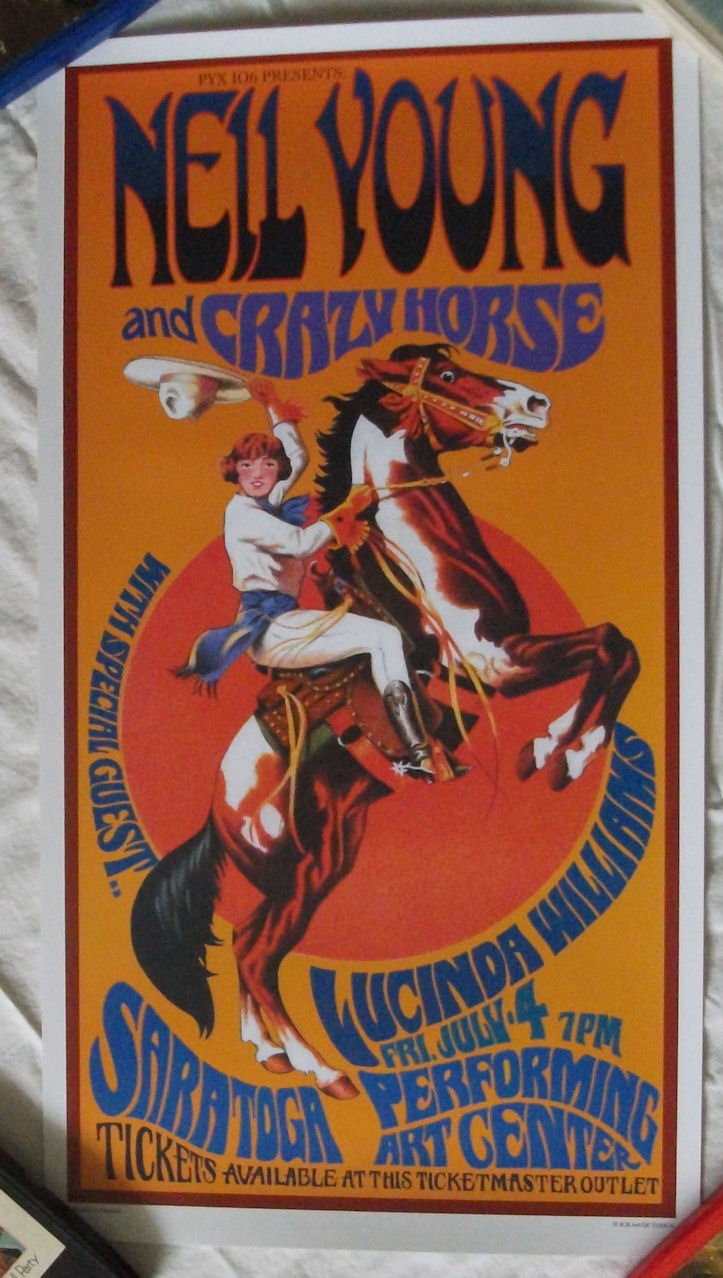 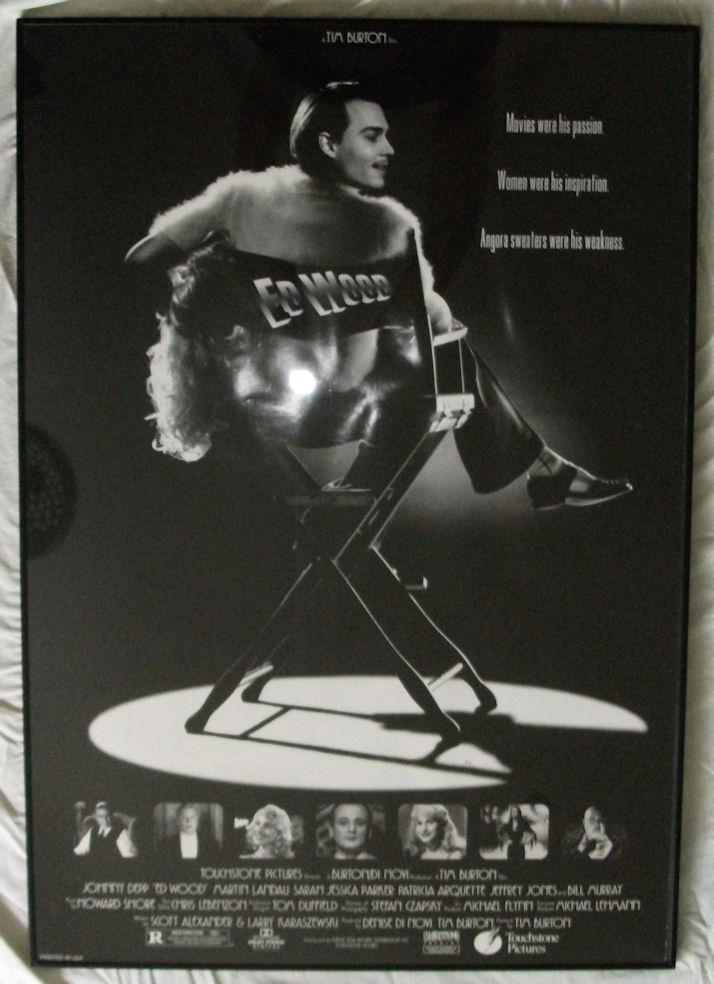 An movie theatre poster for Tim Burton’s love letter to gloriously Grade Z auteur, Ed Wood. A gift from another pal, WBN Rigs.  Framed and hanging in our house. 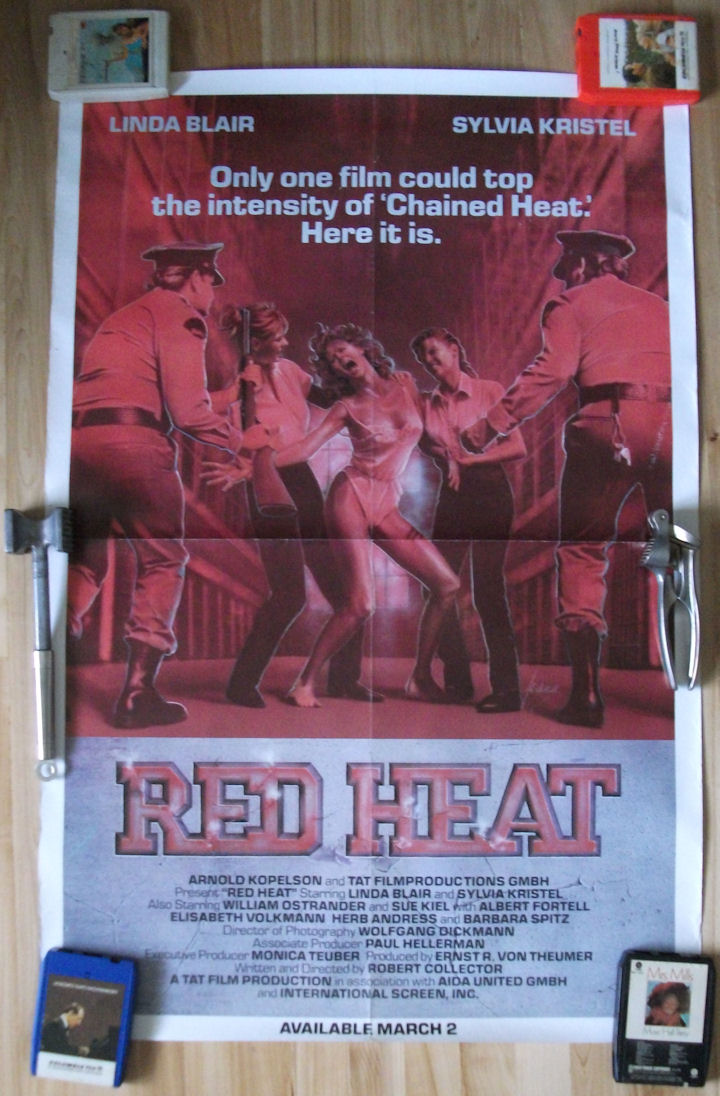 Emmanuelle and Ms. Green Pea soup: together at last! The tagline for the movie says it all, really.   I got this during my record store days as a promo for the video release.  It made for perfect kitchen kitsch in past apartments during younger years.

Note: The 8-tracks weren’t strong enough to keep this huge poster flat, so I had to raid the kitchen utensils for back-up.  Voila!: new uses for the garlic press and meat tenderizer. 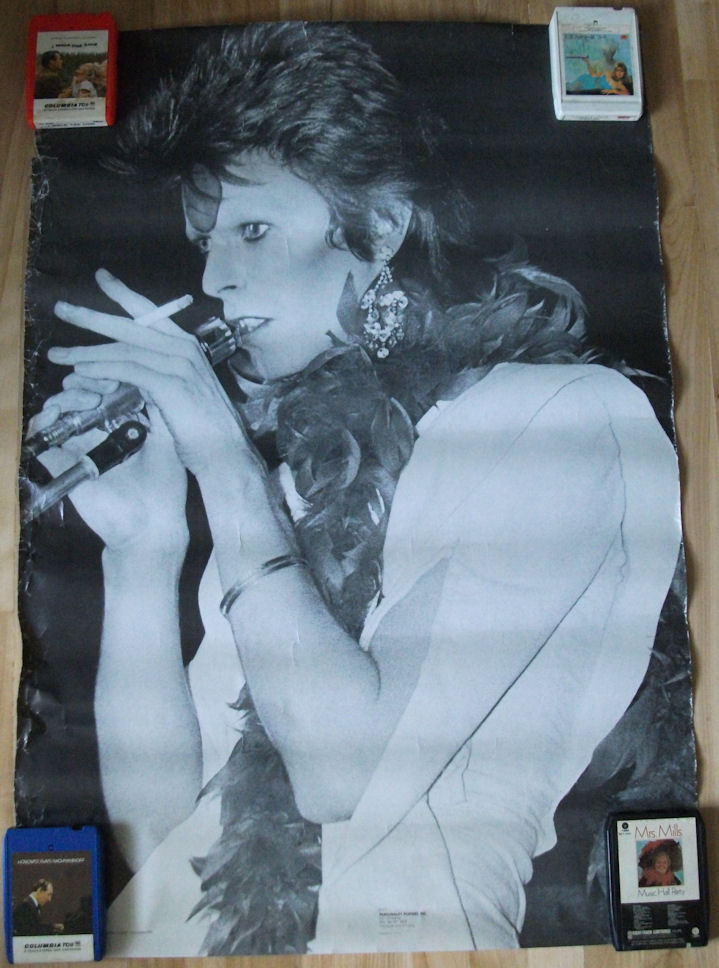 (Above) Can’t remember if this is the original Bowie poster I had on my wall in the 1970s or if this was given to me later.  Below is a promo for his 1989 Sound & Vision box set, preceding his Ryko reissue campaign.  The paper is so thick on this one, that I had to go and raid my toolbox for extra heavy anchors. 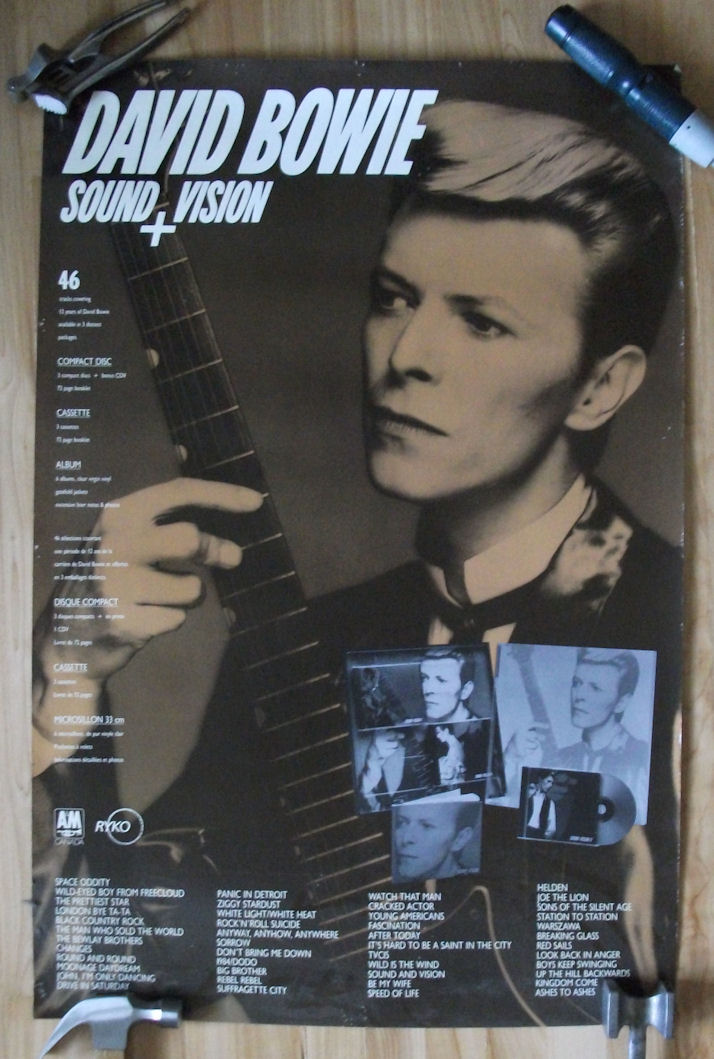 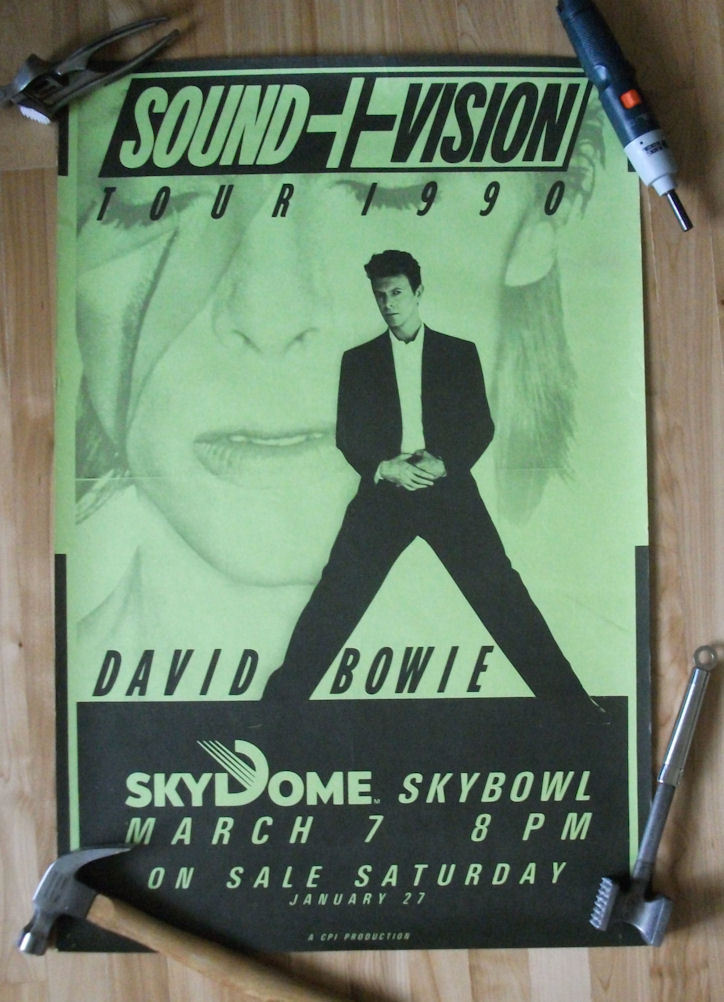 (Above) A promo poster for David Bowie‘s then-upcoming Toronto show at SkyDome (and coming up in this series as no. 67) and for a MuchMusic contest tied in with the tour (below — the red blotches are a not-entirely successful attempt to block the flash). 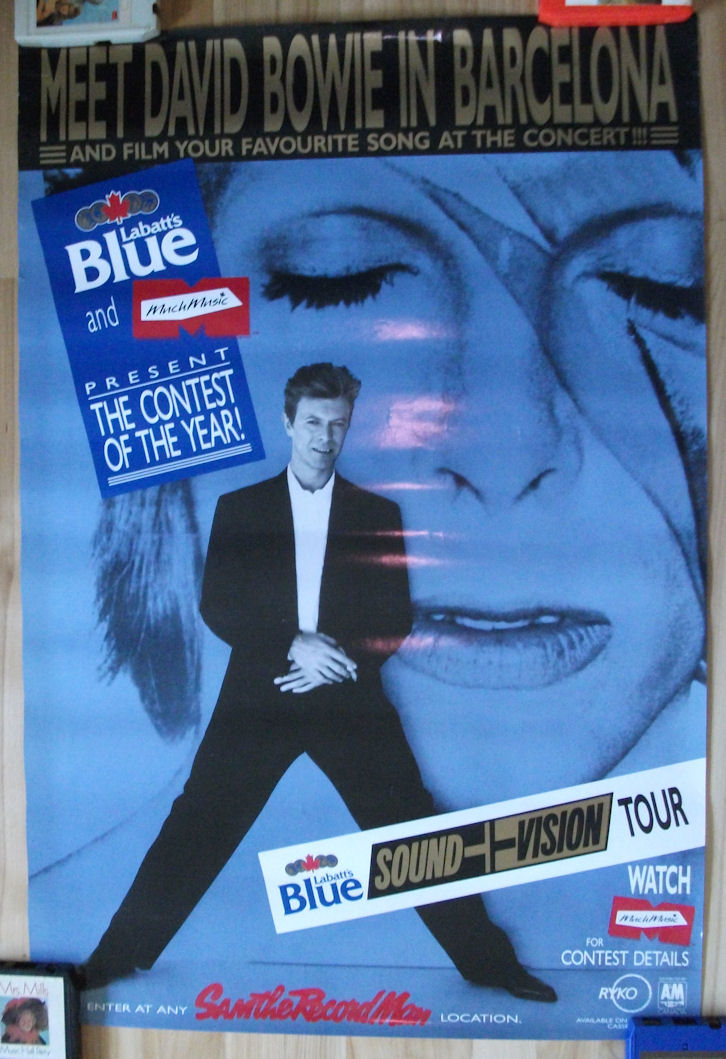 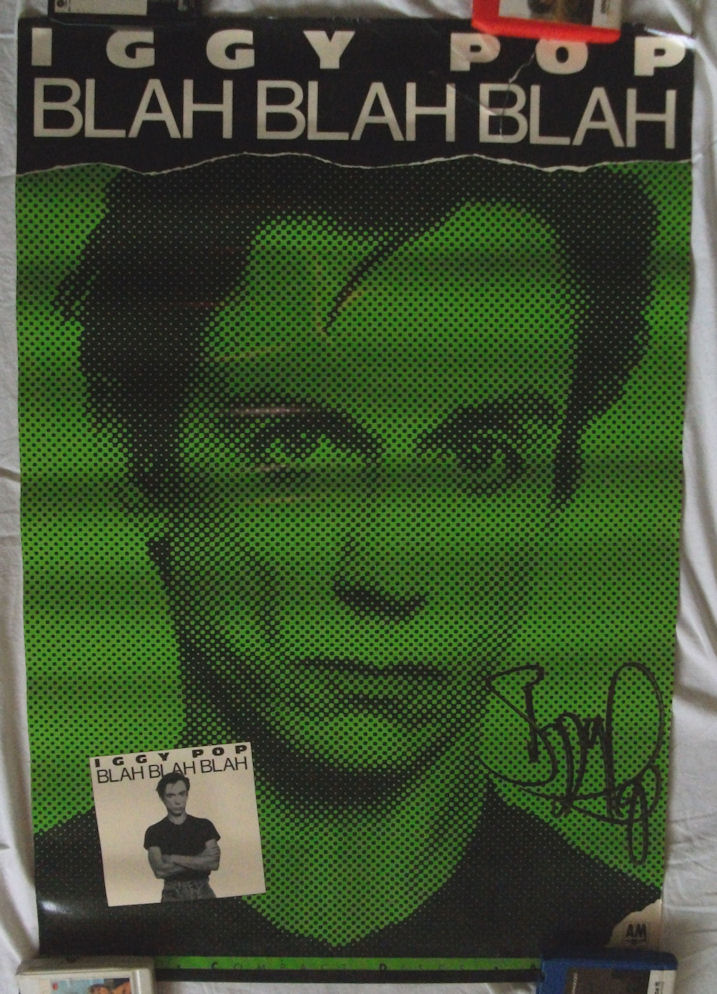 (Above) An autographed Iggy Pop poster for 1986’s Blah, Blah, Blah, courtesy of an A&M rep I was friendly with at the time.  I had forgotten that I had this fixture of many walls during my university years.  Below is a promo poster for 1988’s Instinct.  I’ve written about seeing Iggy in 1981 and 1982, but the third time, which occurred during the Instinct tour, truly was the charm (coming up as no. 48).  I also have one of those promotional Iggy Pop cans, sitting feet away from me now. 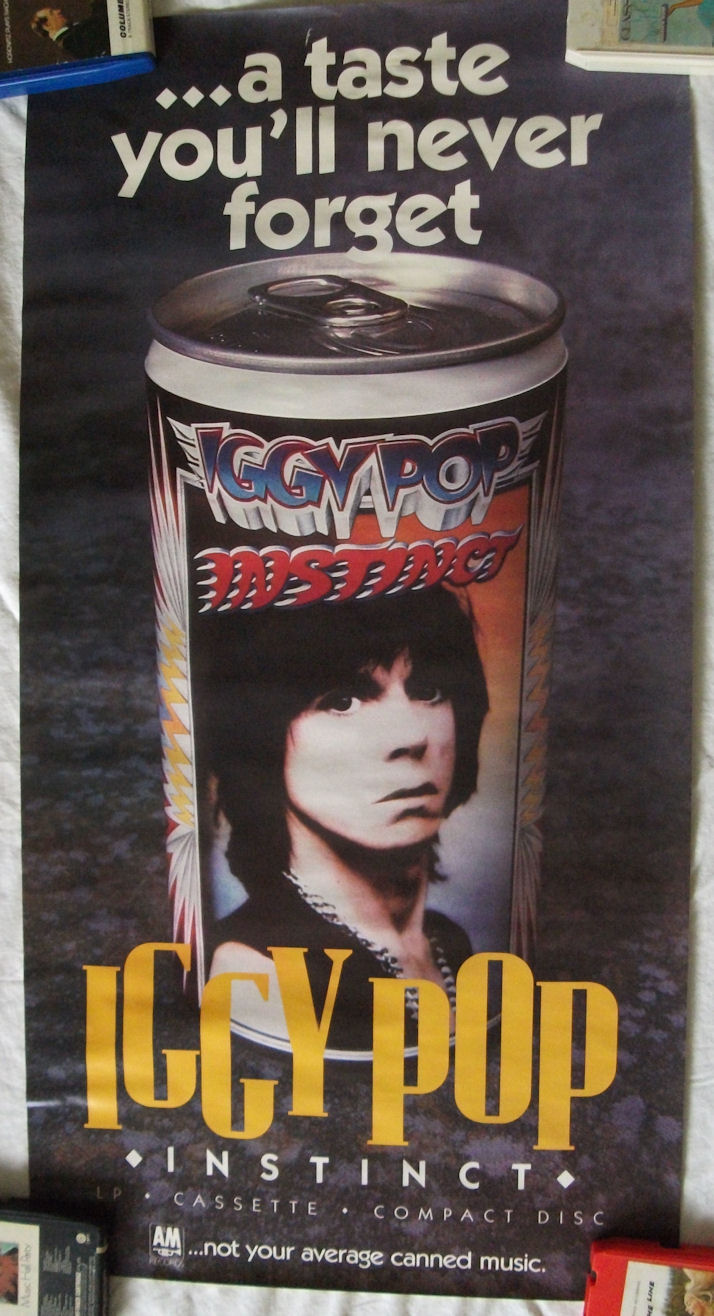 A life-size Lou Reed promo poster for his 1989 New York album.  This was a given to me by my fellow DJ pals in tandem with being voted DJ of the year at my campus radio station.  This poster stood at the top of a stairwell in one particular second-floor apartment during university for many years.  I also saw him twice on this tour (nos. 54 and 59). 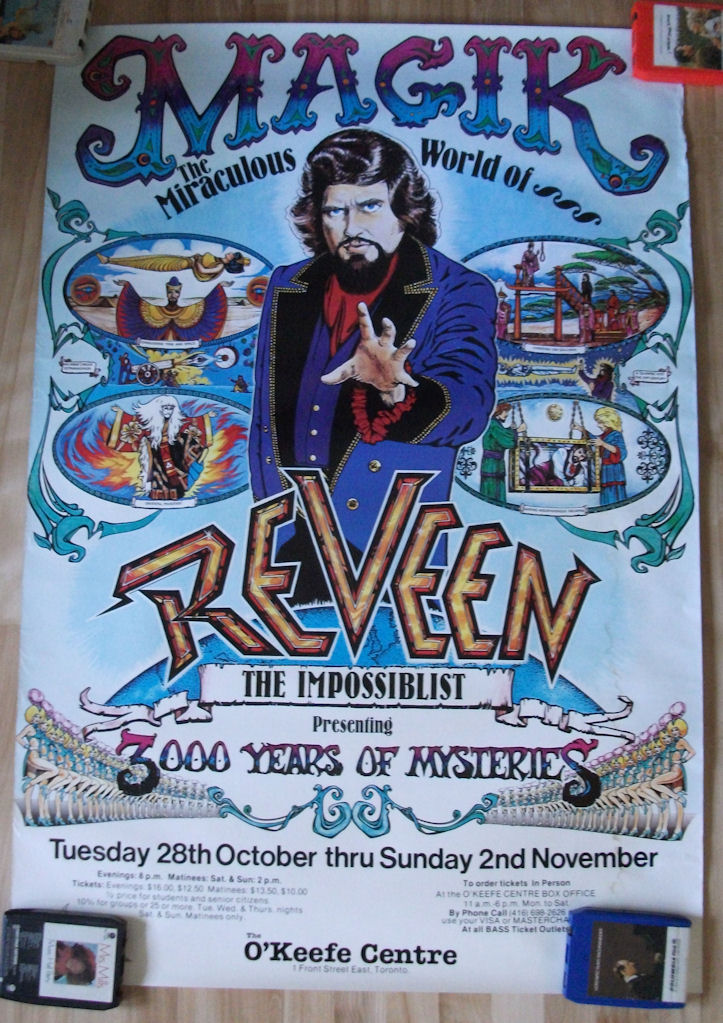 For those of you of a certain age and geography, the mere mention of mentalist/“impossibilist” Reveen will bring the memories flooding back of another time and place. This poster advertising his appearance at The O’Keefe Centre (now the Sony Centre for the Performing Arts) was also a gift from MZ — and is Massive.  This is going to co$t a few nickels to frame.   Below is a Trailer Park Boys Season 5 poster, featuring Reveen’s lookalike, Ricky, on the left. 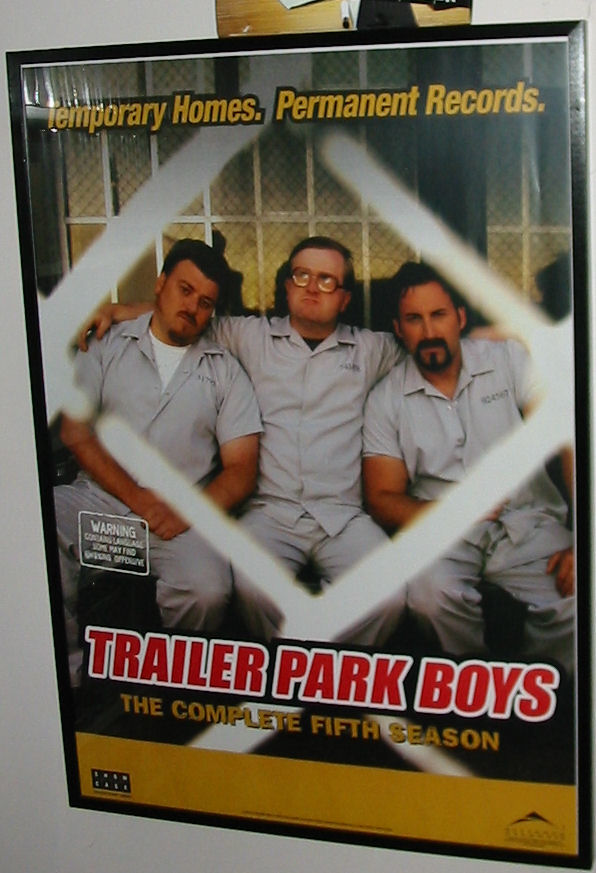 Another big TV favourite from the last decade: Little Britain.  Our pal Mr. Bear brought this back for us from the UK. 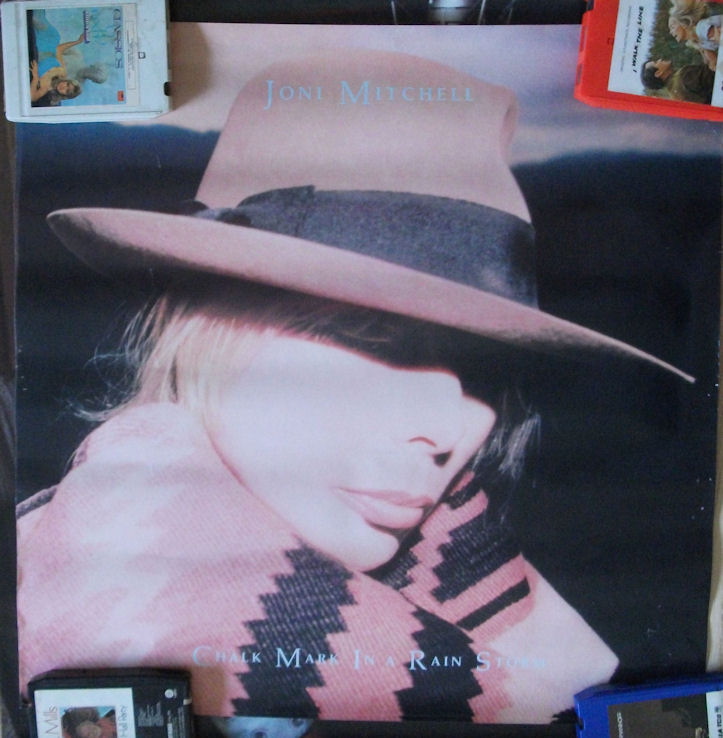 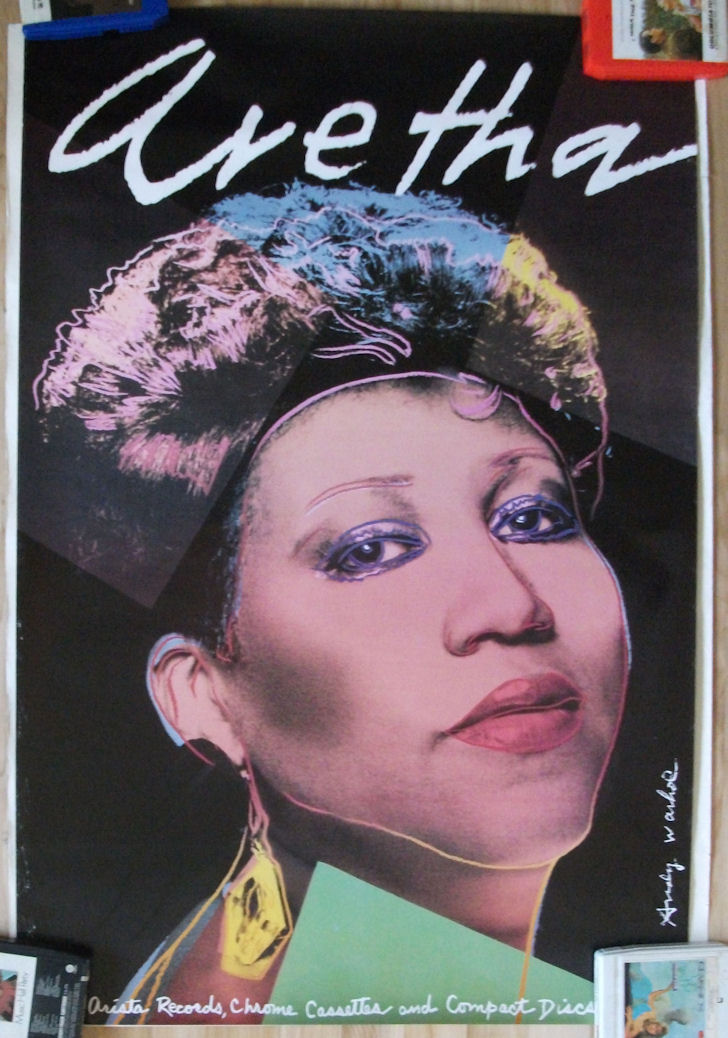 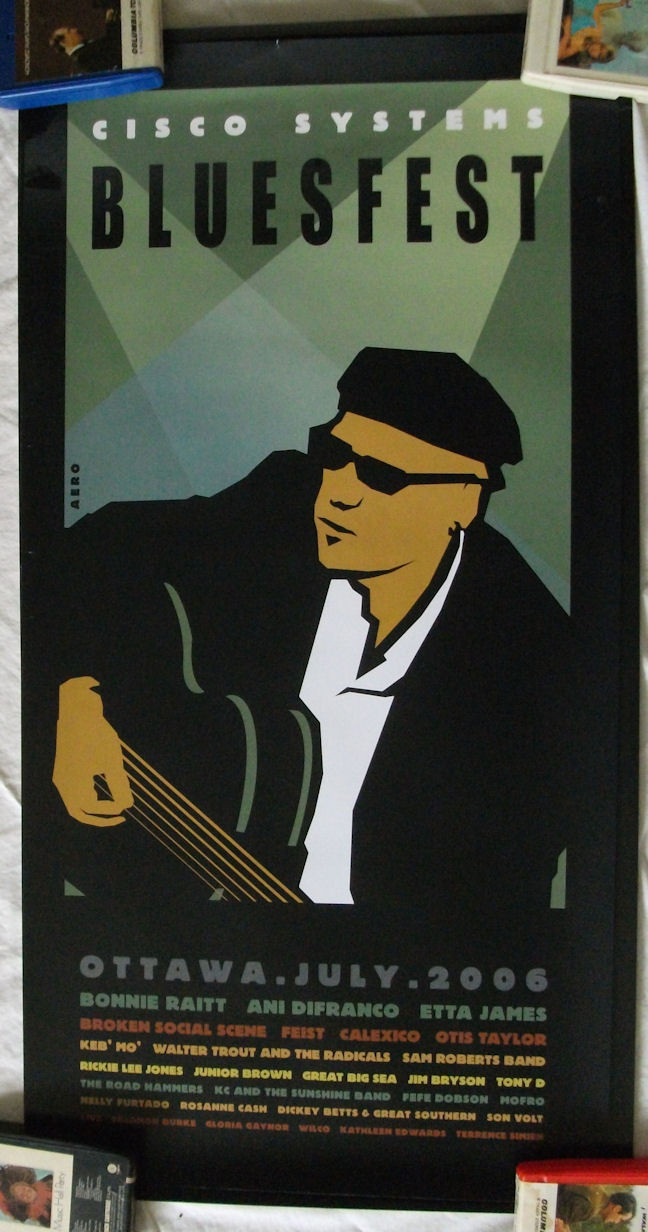 Two beautiful, to-be-framed posters for the 2006 and 2007 editions of Ottawa Bluesfest. I believe that’s Ottawa’s Tony D rendered above, while Van Morrison — who headlined the opening night that year — is featured below (and they’re coming up later too, etc. etc.). 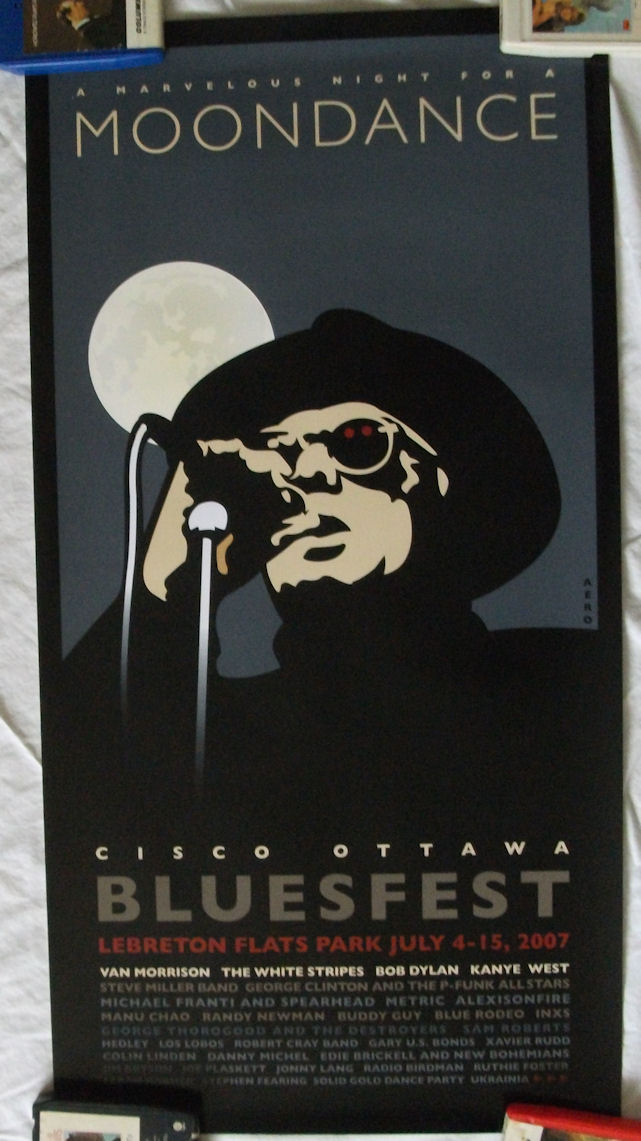 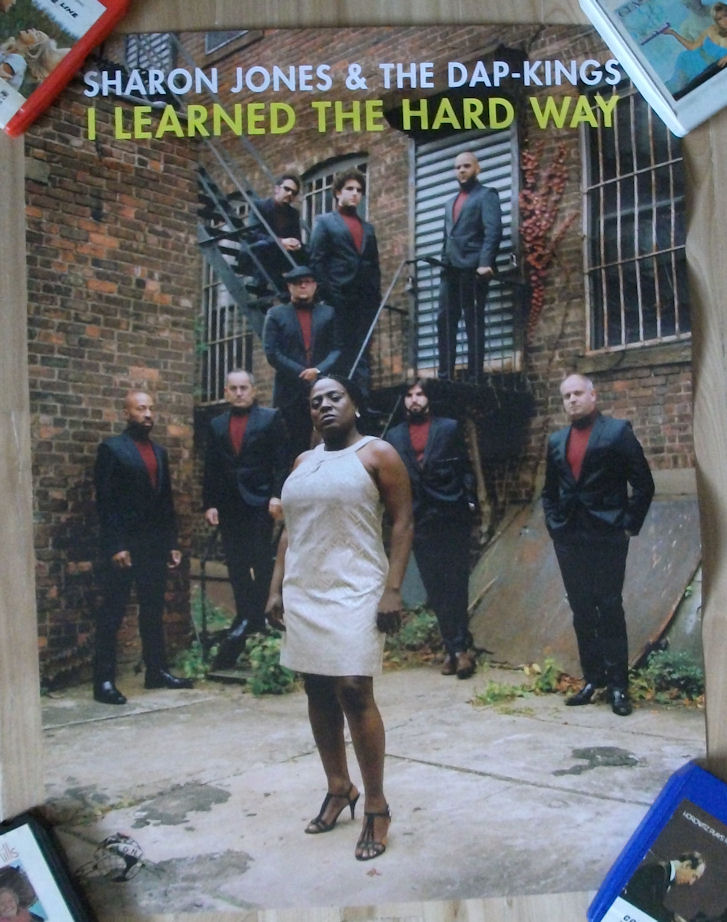 A recent promo poster for Sharon Jones and the Dap-Kings’ I Learned the Hard Way (I’ve published my review of the 2011 Ottawa show from that tour).  She and the band have a brand new album completed but, sadly, Sharon has been diagnosed with bile duct cancer which will require surgery.  Here’s hoping that Sharon has a speedy and full recovery, and will be returning to performing soon.

The Grapes of Wrath — recently reunited — will be coming up in this series a few times during the late 80s/early 90s.  They’re also a band I interviewed on a number of occasions back in the day and hung out with a few times — a great bunch of fellows.  Here is a promo for their best album, and a big hit for them here in Canada: 1989’s Now and Again. 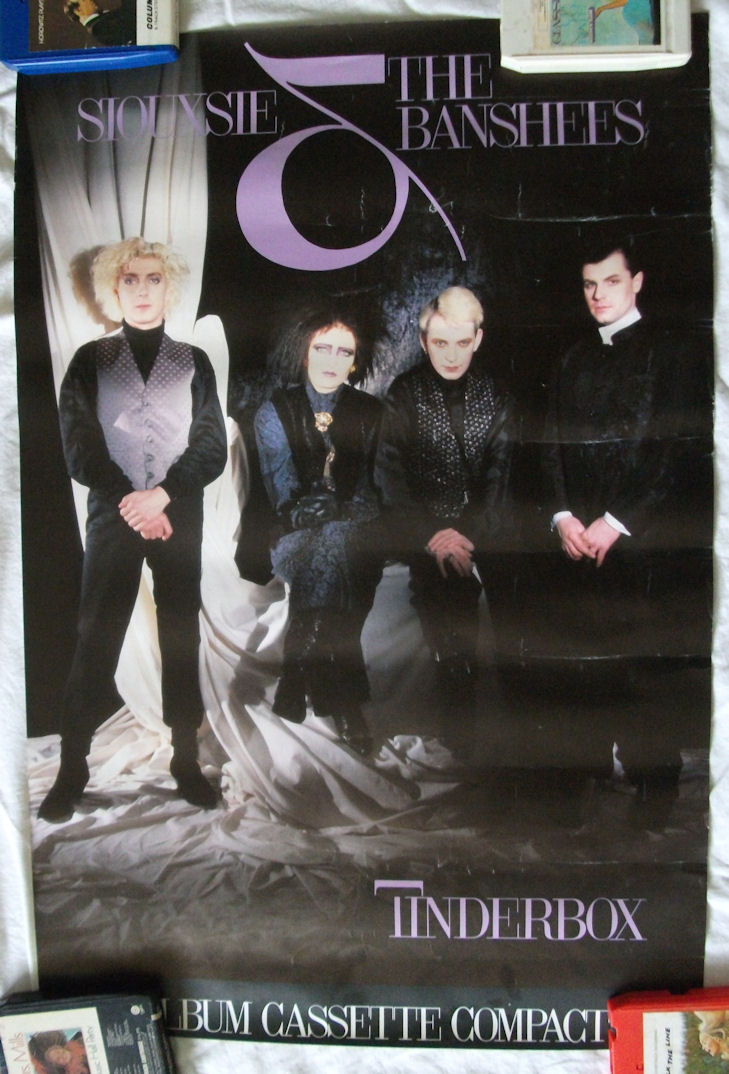 Siouxsie and the Banshees are coming up in the series soon — no. 26 — with that gig tied to a humorous-in-hindsight adventure.  Sadly, 1986’s Tinderbox is where a lot of things start to go pear-shaped for the Banshees. 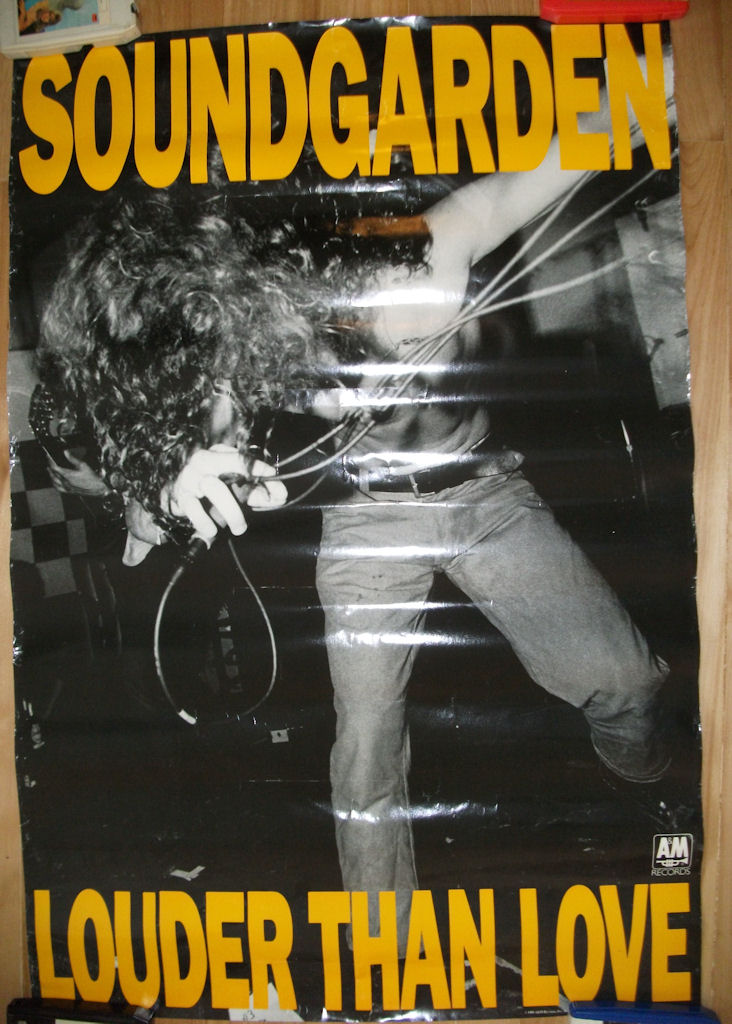 An unfortunately wrinkled poster for Soundgarden’s 1989 A&M debut, Louder Than Love: an album that I played frequently at that time and always associate with the dawn of the 1990s.  I  thought, and still think, this was a big leap forward from Ultramega OK — and also thought it was interesting that they were from Seattle.  Aside from The Screaming Trees, we at the campus station in Ontario didn’t really hear of many bands for the US northwest … none of us had a clue of what would explode about two years later (and they’re coming up as part of my entry for Lollapalooza 1992, no. 76). 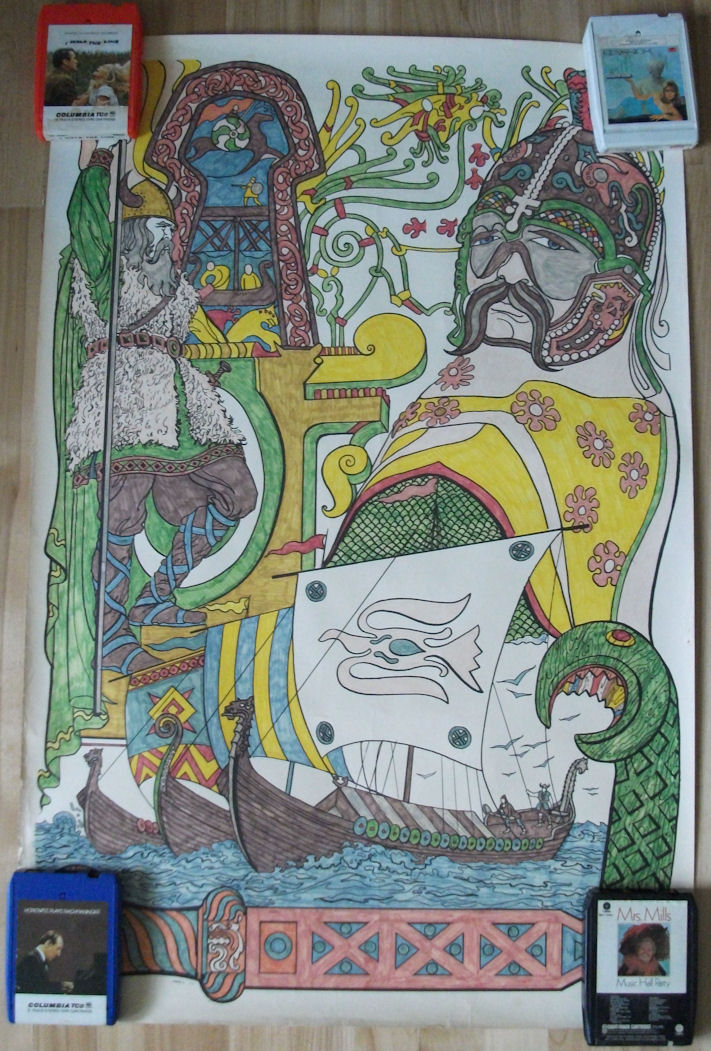 Finally, who remembers the Poster Art craze from the early 70s?  I did the hideous Viking one up above, and that’s my sister’s felt-tip-marker prowess is on display below.  I have a vivid memory of working on this amid repeated plays of Elton John’s Goodbye Yellow Brick Road. 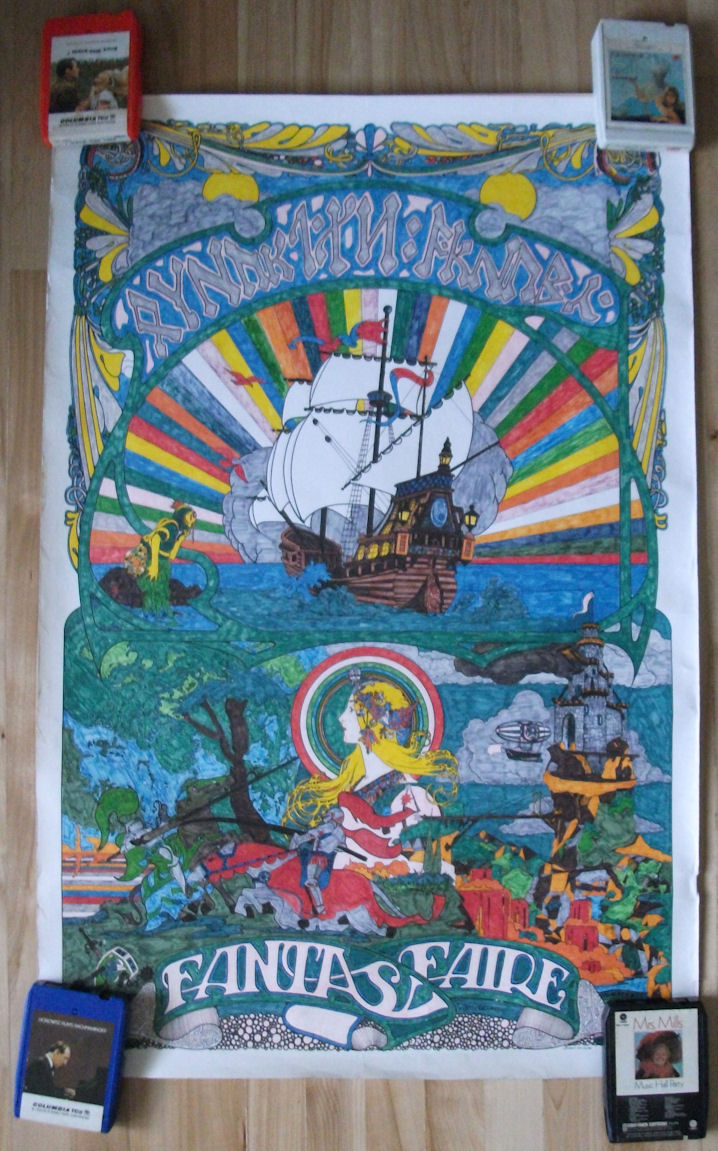 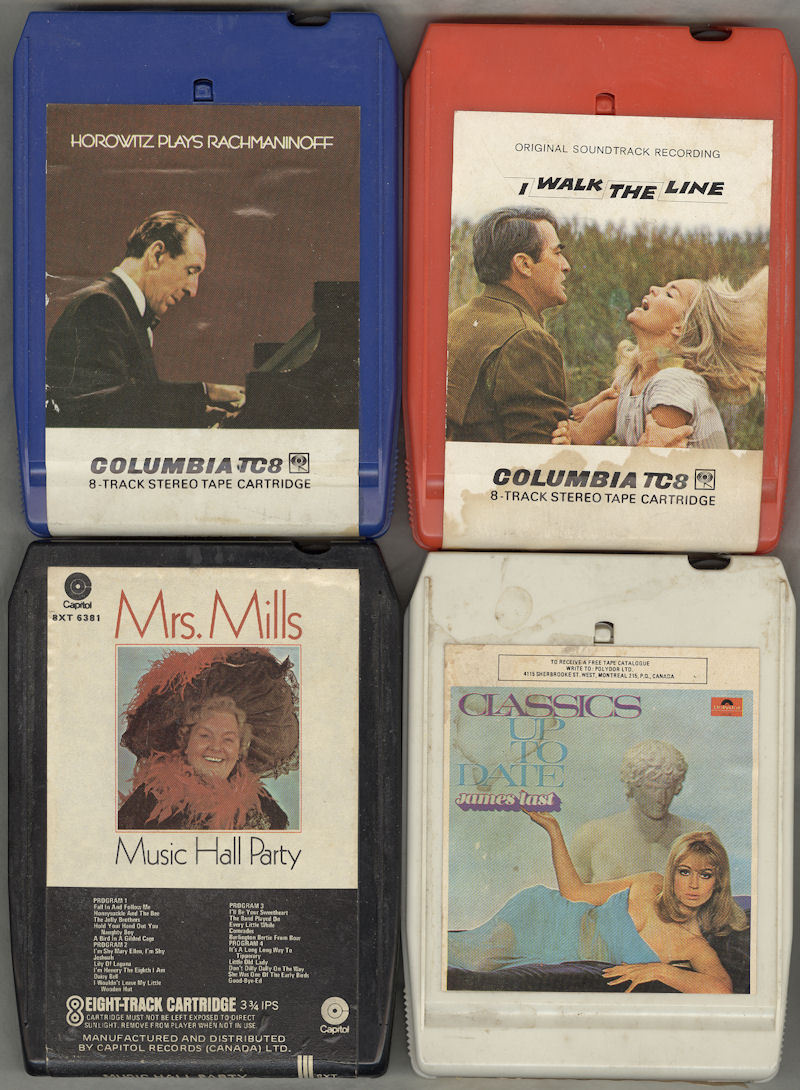 Finally, let’s hear it for these fine, quality 8-tracks that did the anchoring.  An 8-Track collection just isn’t complete without at least one James Last title, now is it?

I’ll be back in later August!  Wishing a continued great summer to all.

(All photos and scans by VA)

Next On Stage –> As mentioned up top, I’m going to refrain from publishing for a few more weeks so as to get a solid backlog under my belt, allowing me to publish more regularly. I am eager to journey back into the past, but first need to get a series of recent gigs off my plate first. Coming this fall ….

… and November should finally see …