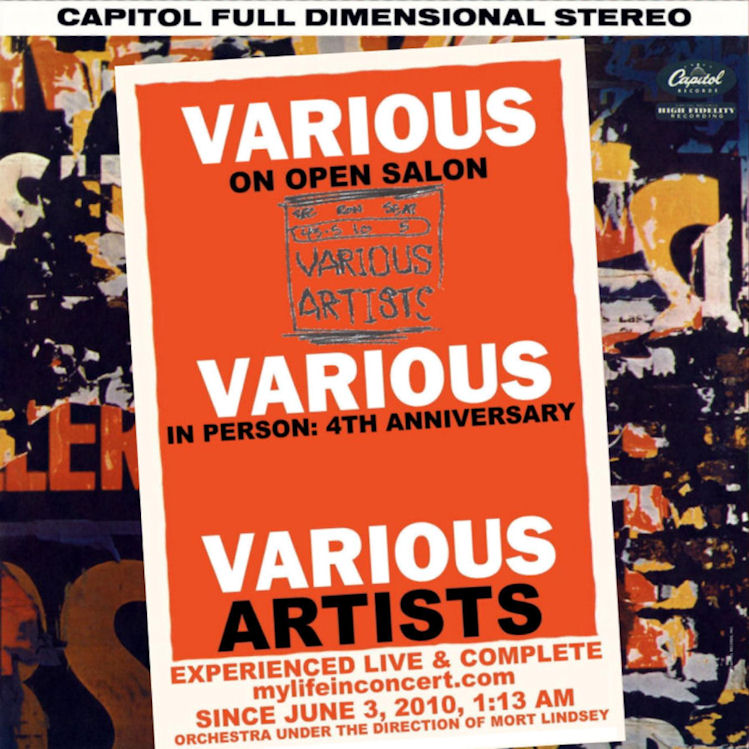 NOTE: This anniversary marked my starting the My Life — In Concert! blog over on Open Salon four years ago and much of the text below was written for the then-OS audience.   As I am publishing my previous anniversary posts for the first time over here on WordPress, I am republishing this 4th anniversary today.  My 5th anniversary blog will be up tomorrow.

Four years on from when I started this blog project (initially only on Open Salon), and OS and I are still chugging along. On my third anniversary, I lamented how the site was a shadow of its former self, but on this fourth benchmarker I actually feel more positive and upbeat. Yeah, yeah, yeah, OS is now seemingly a permanently closed entity, and in terms of community interaction it’s a ghost of not only its former self but of its former promise. And, yes, that’s a shame.

However, OS for me was more of a place to launch and house a writing project I wanted to undertake, to hopefully reach an audience interested in what I was writing about rather than writing just for OSers per se.  Viewed from that lens, I have no complaints. I crosspost here on my WordPress blog but still get more traffic, exposure, and viral surprises vis a vis my ability to publish over on Open Salon — so thanks OS for, at the very least, keeping the lights on as it’s giving me readers and continued connections. Judging by the emails and private contact I’m getting, the majority of people reading now come from outside OS, which was part of the plan from the beginning.

Obviously Salon is keeping the bare-bones juices flowing into the site because they are getting the requisite hits to make it feasible, so I just hope that the numbers for all ongoing contributors keeps going along with the site.

Thanks muchly to the handful of terrific OS writers who continue to read and drop me a friendly Howdy Do either via comments or personal messages. I’m glad we’re still here together and always enjoy reading what you have to say (you know who you are). It’s great to still be interacting four years on.

Cheers also to former-OSers I still interact with outside of this site. And thanks also to the many new readers via WP or through social media who have commented via that route or contacted me. Many of you have had fun, interesting music or media anecdotes of your own to relate to me and I love the interaction of experiences. And as imperfect as the current OS is, I wouldn’t have had this forum if OS had not existed in the first place. It’s too bad it can’t be what it used to be, and don’t hold out much hope that it will return, but I’m glad to have it as a platform.

While a busy life necessitates publishing gaps, and I wish I had more time for more frequent pieces, I’m still every bit as enthused about writing and creating the accompanying graphics as I ever was.  I now expect to make the concert series memoir an continuing component in my ongoing life in one form or another. Thanks again for the support to those who have read, shared, liked, and linked to pieces new and old.

And, as festival season begins, remember to get out of the house and support live music and musicians!

Have a great summer, everyone.

Yay, you. I really appreciate your posts on music (even when we agree to disagree) because it opens up new vistas for me. For that alone, many thanks.

Yes, it would indeed be nice if the admins took some kind of interest in this place again. I mean, how tough would it be to select a couple of posts a day for the cover?

Still, like you, I’m glad it’s still here, warts, blemishes and all. The people I’ve met (metaphorically speaking, bien sur) have mostly been terrific and their commentary extraordinary.

I’ve never been able to tell what the off-site readership is, does, or cares about. I also have no idea if they just read posts or comment streams. So I’ve always ignored them. Glad someone has a clue.

The only exceptions I’ve seen were back when the site was open. I once had a person sign on to OS just to comment on something I wrote, but that’s because it was unusual and highly political: As someone very conspicuously Jewish, I wrote a post supporting the Ground Zero Mosque, and a Muslim wrote in happy to see Jewish support.

So how do you do that?

VA, a very happy 4th anniversary to you! June is a great time not only for birthdays, but OS anniversaries. As noted, the site is minimalist with regards to what was once a robust curatorial/editorial site but it still works otherwise. I also have readers from the outside and I recently was in conversation with one who is also a RISD grad and came across the blog.

I lift my Champagne glass to toast many more happy years for you and the rest of the OSers who continue to enjoy posting and commenting here!

Jonathan Wolfman
I know that if it weren’t for your wit, your awesome recap of your concert going life and your ability to write, I would have little reasons to frequent OS. Thank you and here’s to a long blogging life (and life overall!) for you!

Linda Seccaspina
If I could I’d make music all day long I would, but I’m married with children. Always enjoyed your posts, congrats on 4 years…….o/e

I place value in the communications I have had over two short years on OS with members. I feel like I have made friends with some quality people who like to write.

One of the great pleasures in my life has been music, particularly moving to it (dancing).

“Music was my refuge. I could crawl into the space between the notes and curl my back to loneliness.” ― Maya Angelou

Lyle Elmgren
I love your blog. Your posts remind me of certain times of my life which correspond with certain bands. I also learn about new bands from your blog that I would have not heard of without you.
Speaking of supporting live music and musicians: On Friday night in Philadelphia, I saw a great band called “Sharon Jones And The Dap Kings” at a club called Union Transfer. Ms. Jones is a “certified” soul singer and she has released several albums.

littlewillie
always a pleasure to read and listen here at your spot, VA!
I will keep comin’ ’round if you do ~

Boanerges: I’m with you Bo on that point and glad you enjoy the posts … and as you know, its reciprocal. Here’s too many more from us both, buddy.

koshersalaami: I do so via three avenues: 1. I have a mirror/personal blog on WP (mylifeinconcert.com) where I cross post, and anyone can comment there; 2. I have a specific email (mylifeinconcert@yahoo.ca) listed in both places and many people have contacted me privately that way; and 3. I finally started being more proactive with Facebook late last summer, primarily as a vehicle to promote my writing, and it’s definitely had an impact. Another group of people contact me via FB or comment on FB (www.facebook.com/mylifeinconcert).

Also, I keep track of the viewing numbers on both sites, not out of narcissism but to see if people are reading, and what. That’s been handy for when a piece from a few years ago suddenly gets hundreds or thousands of views in a short period. That tells me that someone, somewhere has linked to the piece and people are accessing it through that portal, which is great. Having pieces go viral is the best way for others to find my work (so, those of you reading who have linked to and featured my pieces, Thanks Muchly!!)

designanator: That’s cool to hear that you made that re-connection through your blog. I’ve had a few of those as well. Let’s both lift a glass of champagne to us all here (and to you, one of my favourite bloggers on OS, not least of which because of how you blend the graphics with your pieces … but then, that’s why you’re “designanator”).

ChillerPop: Thanks for the kind words and your support. You are truly another one of my favourite bloggers here (or anyone), with a distinctive voice, perspective, and sense of humour.

Linda: And sometimes, the words and music merge. So appreciate your stopping by and your support through the years. Hugs!

o/e: Thanks. I wish there were two (or three) of me so I could accomplish everything I would like to. Must get around to creating a Cylon version(s) of myself.

Lyle: Hi Lyle — a fellow Canuck, I see! Have never been to Saskatoon though … the closest I got was Regina. Merci for apropos quote from the late, great Maya Angelou.

littlewillie: Thanks, and I’m glad that you’ve returned to blogging here. I’ve missed your dark humour. As for the great Sharon Jones — and the killer Dap-Kings — I am a major fan and have all her discs. Check out my entry no. 158 on the gig I saw her play in 2011 — Sharon kissed me after the gig! She’s one of the finest live performers around today.

VariousArtists
catch 22: Always a pleasure to have you drop by, catch. I’ll keep ’em comin’ …

VariousArtists
Happy glorious fourth VA and I’ll lead the “Four more years” chant. No one writes about music with the depth, insight, knowledge and local color as you do. Keep it up and I’m always happy to read and listen to more.

Abrawang
Abra: It’s always great when you stop by and thanks for the support through the years. Also glad to see you’re still writing and publishing on a wide range of topics and observations. Here’s to four more (at least) for both of us.

VariousArtists
Thanks VA. I’m finally trying to organize a post about my Brasil days, which I hope to complete before the World Cup begins.

Abrawang
Abra: I particularly like your stories from your South American experiences, so I’m looking forward to it.